Episode 4 is now up at the Escapist

God DAMN that turned out way more amazing than I had imagined! I am so excited! 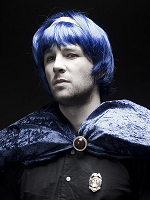 Wow.
Pretty awesome, but this episode felt to me that not a lot happened. I was expecting a little more, since this is the middle part of the entire story.
It was still executed pretty damn well.
Peach and Luigi are still great actors and Ganondorf really stole the show. The Star Fox characters...I didn't expect them to be street thugs, but their costumes were better than expected. Sonic and Snake were pretty sad, but they were still great. Sonic in a wheelchair and Snake as a homeless man. I didn't really expect that, either.
Marth and Ike finally got to talk. They were nice, but I felt that Ike was trying to be overly dramatic. (But then again, that made the "no sympathy from me" quote pretty hilarious.)
I didn't realize that Olimar was there until the end, but then I got it. End of Days. Just perfect.
And Ness and Lucas. A little disappointing to see them in such minor roles, but they were exactly as they should be. Kids.

Overall, this episode was still awesome, but I don't think it topped the previous ones. (WE WANT KIRBY.)

And +30 respect points for the "Who watches the Game and Watch" graffiti.


Well I can officially say there goes my overall theory for the series... so sad.

Rather interesting and yet really exciting episode with the fight scene. I can't really elaborate more on it since like Spontaneous Combustion said it was a rather short episode really.

I really like how Ness and Lucas were used in this episode, it really tied it together... but I'm sad they weren't used more prominently (I've always held Ness with higher regard).

The main thing that worries me is that we're alledgedly half way through the series (or first season?) and that time-wise only one day has gone by. Personally I think a little more time needs to go by... not necessarily slow the series down, but I find it a little unrealistic that the Kingdom will either be saved or damned overnight.

I too am wondering what the heck was the scene at the start of this episode. Peach is already saved? Daisy is somehow dead? What?
Was that a flash-forward of some sort?

Definitely a flash back.

...wha...
If that's a flashback, why is Daisy suddenly dead? Why wasn't her death mentioned earlier? Wha...
I am confused.

And by the way, I watched the episode again. Somehow I missed Gray Fox the first time. There's also that Hylian bum, but I don't know if she's supposed to represent a certain Zelda character.
And I think I'll be taking my words back. Ike wasn't too dramatic. He was playing a cop who is a bit overconfident. In that way it was perfect.

What do you mean suddenly dead? She hasn't been mentioned before, and now you are learning new info.

I mean...it was implied that Daisy was killed by the same psychopath who killed Pichu, Roy and Mewtwo. Why wasn't she mentioned in the news?
Hmm...Luigi's hair was shorter. That has to mean something.

Really people. That was a flash back while he was unconscious from the Kongs. Daisy got killed by Kirby.

I've only watched it once so far, but I'll go ahead with my first impressions. Ganon kicks ass. Seriously. The Starfox gang vs Ike and Marth was brilliant. Kudos for the awesome props. Some of the lines seemed a little forced, but the lack of sympathy was epic, and the stuffy attitude was expected. Sonic in a wheelchair was hilarious, as was Grey Fox just laying there. Actually, all the references were very well done, with the G-dub grafitti and the End of Days sign particularly clever.

As for the concerns about things racheting up, I'm not too worried. Characters are getting introduced much faster than I'd expected, and by this point I'm much more interested in character development. Ganon also dropped a couple of hints about the turf war for us to chew over, and the list of suspect for the killer is rapidly shrinking. Also, a billion points for Ike and Marth's expanded roles. I was worried they get relegated to the sidelines.

I'll post more in depth later, once my thoughts are more collected. Two thumbs way up.

Eiron wrote:Really people. That was a flash back while he was unconscious from the Kongs. Daisy got killed by Kirby.

...hmm. I think you're right. That makes sense.
By the way, I think they should do a prequel once this series is finished. It could include the Mario brothers trying to catch Kirby. And maybe the fall of Hyrule, too.

Personally, I'm very glad that Olimar has a seemingly major role. I love the pikmin series, though expected he would be reduced to just a drug dealer.
The costumes in this were great as always. They might even be my favorite thing about this series.
All the new people were excellent, Ganon especially stood out in my mind as the best performer of this episode.

Amazingaltough for 13 minutes it did seem pretty quick. I loved Snake and can't believe I couldn't see him as a street bum. The box would've been a dead give away. I was actually expected Snake to be the guy Luigi was to find. I loved Falco in this. Very well done.

Luigi is gonna have to storm a castle to get to Bowser me thinks.

I'll post more later when I have the time.

Loved it, and I'm glad to finally see an action scene. I didn't like Fox's accent too much, but hell, this was probably the only thing about the Star Fox trio I didn't like. And the costumes were simply amazing! I wish I had that Fox costume, it's awesome!

Also, Luigi's 'stache shrunk. o.o
Also, I think Matt's Ganon is just side by side with Kyle's Wario, performance-wise.

These episodes just keep getting better as time goes by. Once again, this one is the best yet.

I was pleased to see Ike and Marth have not only actual lines, but a real part in the episode. Then with a little bit of fighting and some arguments, we actually got glimpses into their personalities, opinions, ect, which I felt made them seem more real as characters.

I'm pleased that Olimar is not only intrduced, but that he have some part in the events to come.
Hooray for Olimar.

I shouldn't 'ave told you that


The accent change for the Star Fox trio was rather ...unforseen? Always thought Falco had a British or Australian accent... but goddamn that was some awesome stuff.

I thought the accents were the best part. Aside from the spectcular makeup. Bloody brilliant.

The Meta Knight wrote:Always thought Falco had a British or Australian accent... but goddamn that was some awesome stuff.

No.
He's from Brooklyn. HANDS OFF MY BREAD.

Falco's accent canonically is from Brooklyn, but obviously Brawl has never been working with the canonical versions of characters.

Sorry for existing, next time I'll remember to not say what I thought.