The traditional meaning of Princess is a female daughter within the royal family. This daughter usually is treated with lots of privileges, in the hopes that she may one day be married off to some important noble person to solidify a marriage. When heroes save princesses (because that's what they do), the heroes get to marry the princesses, which gives the hero a rise in rank, as well as access to the royalty who would give the hero money. If, in some rare circumstance, the princess is the only offspring of the royal family, then the hero gets to become King!

When Zelda became appointed "Acting Princess" though, this suggests that this "traditional" meaning is outdated. There is no mention of the King at all in TWBB, only the Princess. And the fact that you can even transfer the title of "Acting Princesses" suggest that the Princess is not one related by blood...but is rather a Political Position that has real power according to the laws of the Mushroom Kingdom.

The fact that a non-royal civilian authority like Police Chief Link can appoint an "Acting Princess" to take the place of the real "Princess" is rather shocking, but this may be due to Police Chief Link's declaration of Martial Law that granted Link this much power.

I can speculate two things as a result of this arrangement: (1) The Royal Family, if any actually exist, is so weak as to be meaningless in the grand scheme of things, Civilians usually can operate freely. (2) If in the unfortunate event Princess Peach dies, Police Chief Link can choose to promote "Acting Princess" Zelda into a 'real' "Princess", due to the current state of Martial Law.

This does explain why Bowser kidnapped the Princess all these times: If the Princess has real power, then kidnapping her will pretty much halt the Kingdom in its track, at least until an "Acting Princess" is appointed to fulfill her duties. There are two questions though:
(1) Who normally selects the Princess?
(2) If you have to EARN the title of Princess, rather than being born into it, how did Princess Peach get into this position? What did Princess Peach do before she gained the title of Princess?

Because it's the Mushroom Kingdom Dumbass.

Have you EVER Played a Mario game in your life?Original Doesn't count btw. 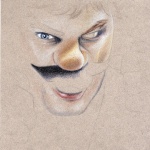 Man I don't understand how the Hyrulien holder of the Triforce of Wisdom with magical powers can become "acting princess" SOOOO does not make sense.

I'm sure that'll be explained in the '2011 release of "Super Mario Bros: Prelude" for Wii and oddly also PC.