did this because I forgot my flash drive at home. A 3D map of Avalanchia. I might add onto this at home. Depends on if I feel like it. 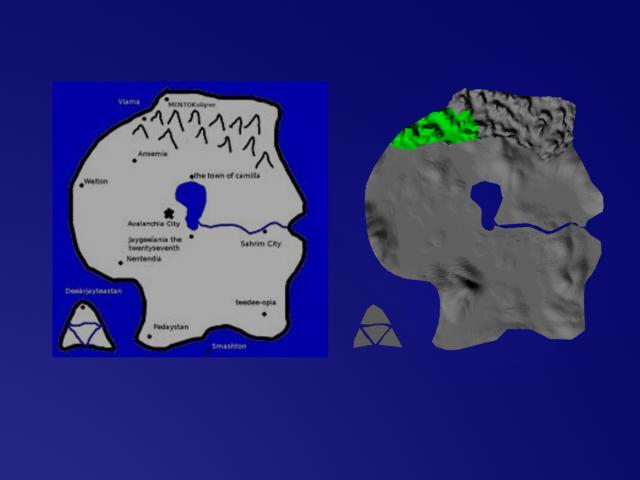 I finally got some headway with knitting, I can do 10 stitches in about a minute. Because of the needle size it takes about an hour to get three inches done though... and the Doctor Who scarf is twice as wide as my current practice scarf. As soon as I get through two skiens of yarn I'll tie it off and buy the right colors and sizes for the who scarf.

Problem is, when I'm done with this it may be 6 feet. The Doctor Who scarf is about 17 feet long, with TONS of color changes...

You guys remember those drawings of the heads I drew waaaay back? Well I been working on drawing the body to one of them. 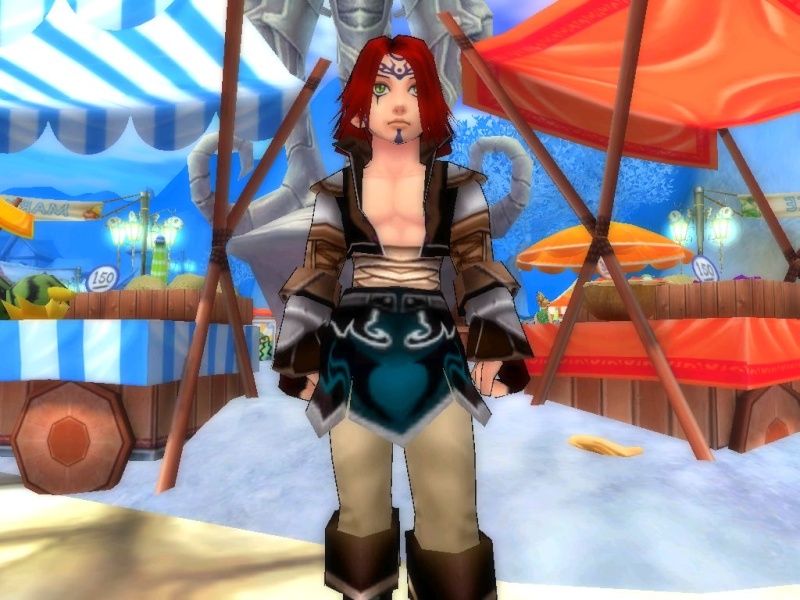 This is still being worked on of course but it is getting there. Started trying to draw this 3 weeks ago but I wanted to practice my drawing before working on him. Yes it could be better but it is a start.

Any criticism is appreciated.

Beyond that, belly buttons are circles, not straight lines.

Been messing around with different mouths recently trying to find one to replace it.

That is not a belly button. That is part of his abs coming up from the bandages.

Got bored an saw a contest to draw your dream TF2 loadout to win it, so I decided, I suck at drawing, so why not?

This is the result of my trying to draw the Pyro with the Last breath, Brain Slug, an Sight For Sore Eyes. 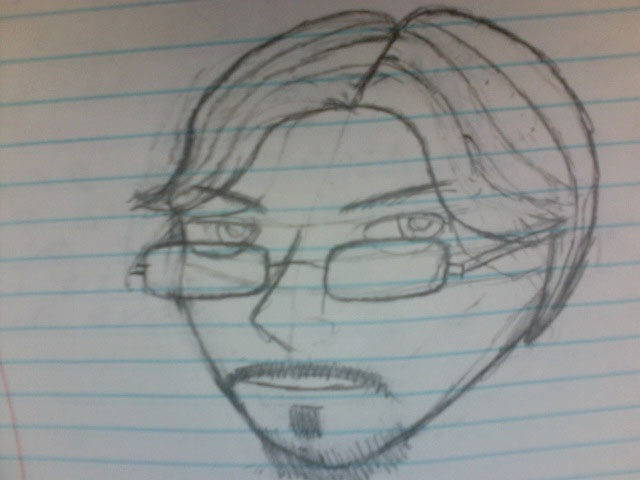 I decided to do a quick sketch of myself. More realistic of a style then I wanted which I will go back and fix later on. Though i am getting better at drawing. (excluding the hair, because fuck hair.)

I also have several things to show off once I upload them to youtube.

This is the best model I have done of a human yet. And there are still things to work out.

seems to be going well. Anatomically speaking, the forearms seem a bit too long and broad however. if you'd slim them down just a bit and shorten them so that the finger tips reach about halfway to the thigh, it should be good. They seem to be almost reaching the knee now, but i could be wrong.
Good job though.

Thank you Perry, fixed up the base model and started working on my character.

This is what I have so far. Took about 4 hours and 30 minutes to make the outfit and I have not done anything to it with textures yet which will make it look loads better. 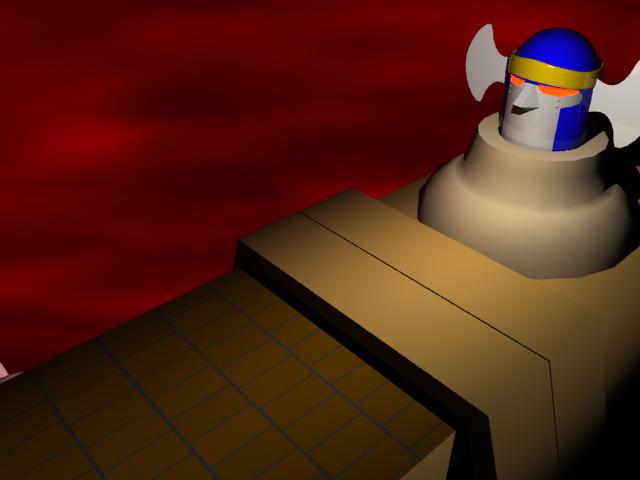 The blade ship I made awhile back. Not sure if I actually posted it here or not. 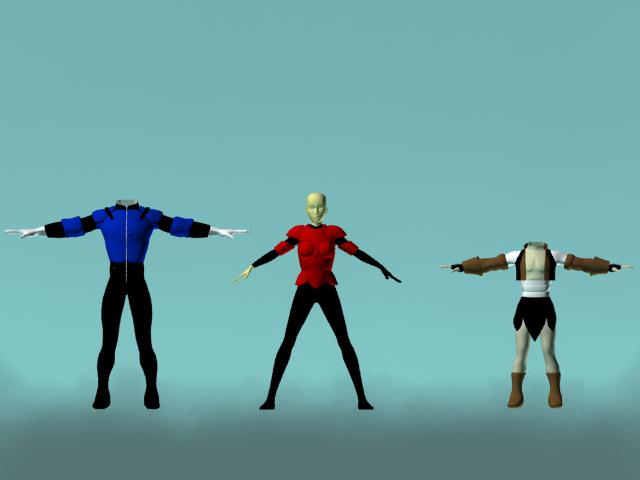 The outfits I have so far. Made the middle and the left one today which is about 2 hours and 30 minutes. 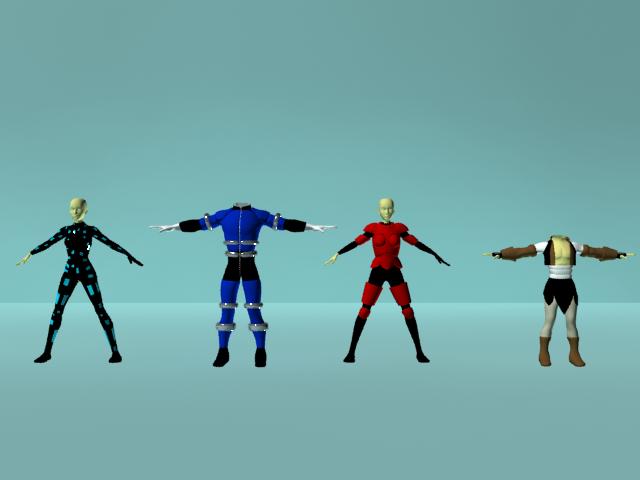 Deadlys armor was off the top of my head. The blue parts of armor are generators for a forcefield suit that I will put in later on. They are scattered so they are harder to hit.

Ziros armor is another one I just sorta made up on the spot with the metal rings amplifying his power and using them as both offensive and defensive. A more detailed explanation will come later.

Deaths armor was the only one there I put some thought into. Which just goes to show the best stuff comes when I just gun it. This is the most boring so far. Going to make it more interesting when I put in the details.

For Viero It would just be wrong if I do not use that armor for him.

These are all beta armors (Save for Vieros) And due to not using any good textures they will not look as good as they can be.

lol That would be awesome. But I can not even rig it to move them yet. Very hard and very long process that I tried before but ended horribly. Going to try to learn more before I attempt that again.

Hey everyone, another collage. This time it is digimon 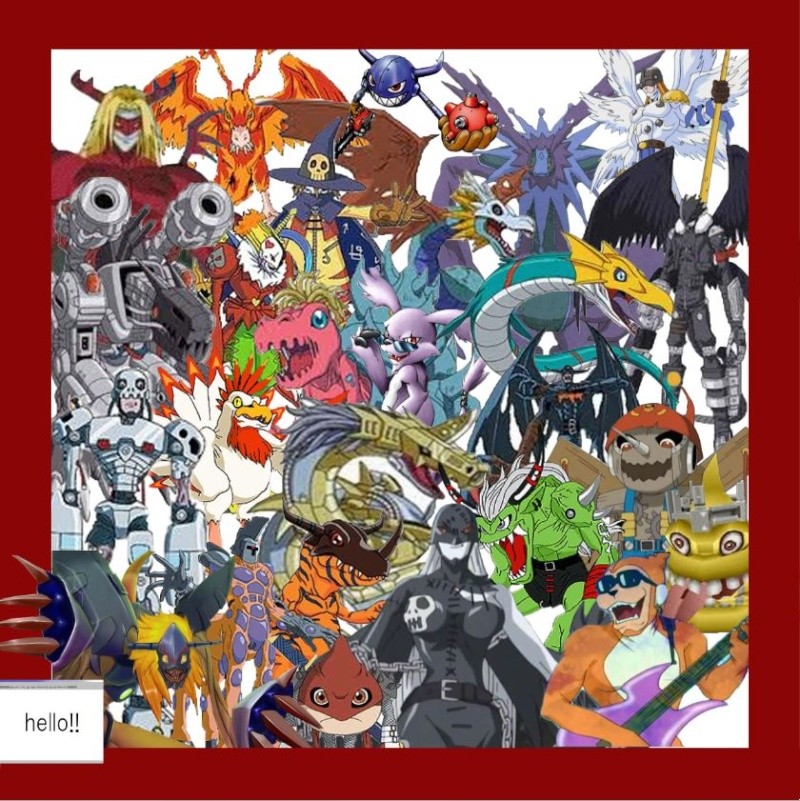 Viero-Diaboromon-bottom left with the Hello! window. Because he is my favorite Digimon with both his story and his design.

Minby-Ninjamon-Onion shaped guy next to me. Because he is the fast digimon that came to mind

Camilla-Lady Devimon- Girl in Leather next to Ninjamon. Not sure why really, just seemed like a good fit.

Ansem-Etamon- Monkey at the bottom right with the guitar. The guitar should explain it.

TD-Andromon-Right above me. Because robots, duh.

Fed-Centaurmon- to the right of Diaboromon and Andromon- Because he is the closest thing to a doctor.

TJ-Greymon- orange dino (If you did not even know that, shame)

Ryan-Orgemon-Only green guy there- Long story short. Both of them started out as dicks but got a lot better.

Kyle-Puppetmon- The one that looks like a puppet...Ya- Because I know you love playing people in mafia.

Roy-King Sukamon- The pile of yellow shit with a crown next to Etamon.....Yup- Because I remembered it and it was just to good to pass up. And hell, your name has king in it. I had to make you king of something. XD Love ya Roy.

Smash-Metalseadramon- Right above Greymon- Ever since you said you wish you had surfers hair I will always picture you as him.

Warchamp-Machinedramonn - Right above Andromon - He kinda seems like a serious guy most of the time. And Machinedramons big thing is War.

LCG-Piedmon-Right next to Machinedramon- Because he is crazy (Not his name, if you seen our chats on Skype before you know what I mean)

Perry-Venommyotismon- Top left- Because he is fucking giant

Outlaw-Giromon -Little ball guy-He throws bombs, As close to being an out law in Digimon with a wanted poster for him. I don't really know what else. I was running out of ideas/room at this point honestly being one of the last ones.

DR-Airdramon - Snake guy with wings- Wind, think about it

Raya-Gazimon - Rabit like guy with sunglasses- Her favorite Digimon (God I hope I got the right Digimon.)

Req-Beelzemon -Guy with guns- Because he has guns

Didn't understand any of that, since I know nothing about digimon, but it's nice to know that I'm still only known for being fast, lol.

Now, someone mind doing one of these with pokemon so I can understand?

I agree, why am I a flying snake?

I always love seeing collages, even if it is something I don't know much about. I think you do some awesome work with both the modeling and the collages Viero! I love how I'm the...I'm...oh well it is very well put together!

Hey Avos, this is yours *Nods*

bah, how did I not remember him? I will edit it in Avo, sorry.

Just started another one last period of "Excel Saga". If you don't know what it is, look it up as I am doing what I want to do with this and did not feel like doing Pokemon. Think of this as a good way to check out new anime that you may not know about as I am going to be doing ones probably none of you have seen/heard of.

And you will not be a pile of yellow shit this time Roy, promise.

Why am I not in it? I think the fact that my brother made it in actually might make it worse...

Yup Vie, you remembered right, Gazimon is my favourite. Although since I'm apparently the only one with a Rookie if a fight breaks out I might be getting hammered...

Smash- If you're going for a surf thing then Surfimon, obviously

Sah- Weirdly I can see him with a Lilymon for some reason.

Perry-Venommyotismon- Top left- Because he is fucking giant

I am devious. I will throw bombs at you.

Sahrimnir wrote:Why am I not in it? I think the fact that my brother made it in actually might make it worse...

Going to try to clear this up now. If any one is missing in any collage I do. it is because there is not enough room and/or I can not think of a character for you. And with mafia going on it has given me less time to think about that stuff.

As for Raya, I went with mainly season 1 Digimon and Digimon I could remember from season 2 because I barely know the others given it has been so long.

DRTJR wrote:I agree, why am I a flying snake?

Because of Vatti, they both control the wind.