Who do you think is the best villain EVAR??!!

I think it's the Joker (the Heath Ledger version). Who do you think it is?

Just kidding. I like The Joker in TDK too.

if video games count, I would also nominate Mother 3's

I am almost tempted to agree with you on Porkey XD But for me Giygas wins in earthbound. The one in Mother 2.

Buuuuuuut. I just have to go with

Melbu Frama. From legend of Dragoon.

Spoiler:
The guy is a fucking dictator over magical super smart beings and can take over bodies.

I would say Giygas but...

Spoiler:
Porky was a much more interesting villain to me. He was very, very insane and very, very evil. More evil than Giygas was by far. He had absolute no scruples or remorse for anything he did, and has no regard for anything, which you can see when he calls the Masked Man his "adorable little monster" and refers to him as "it". And then there's his motives. He time traveled so he could take over a world, which he did, and then he got bored and decided to destroy it. It's so childish, but that's why it's so effective. Porky is nothing but a kid at heart, as he says himself. A sick, bitter, twisted, monstrous kid who managed to obtain all the power in the world. Mother 3 is such an under appreciated gem. I wish more people could experience it, as it's a really beautiful game, I think.

just sayin, guys, but there IS a video game villain thread...

Also, in the category of Disney villains, I'd like to nominate Claude Frollo. I have a thing for evil son-of-a-bitch villains.

Viero wrote:Mother 3 was a kick ass mothering fucking game and that are 100% stupid for not bringing it to the US

in the video games section?

thinking retrospectivly, it's actually a "scariest" villain thread, but the point of video games go there and other stuff goes here stands.

Yeah, that's why there's a "Video Game Crushes" topic in this section, huh?

There is a "Favourite Video Game Villains" topic. I've already posted in there. But anyway.

Another old classic I like is Darth Vader. No particular reason, he's just badass and ruthless.

Tyler Durden (Fight Club), for what he represents and all that symbolism omgwtfbbqgenius. Though the endfight is extremely ridiculous and raises all sorts of questions.

Claude Frollo (Hunchback). If in the name of god I cant have sex with this beautifull pagan (sp), I'll burn her to death. Even the disney version is filled with inuendo's, like more then usual.

Joker (Dark Knight). This one is just so menacing and insane. He perfectly captures the joker being seemingly insane but actually having evil plan after evil plan. More people will remember him then Bale? who played Batman. Just goes to show that Batman is the least interesting in everything he's in.

Black Knight (FE Path of Radiance). This one is interesting. He kills the father of the main character in front of his eyes, and his only desire seems to be to defeat the kid when he gets strong enough. His boss is just delightfully evil, while the Black Knight is scheming, and seems to follow his own plan. In the sequel it gets even more confusing, but the final reveal is just utterly disappointing.

Mr Burns (Simpsons). Not always a bad guy per se, but I just love his character. He could eat puppies for breakfast without frowning.

For me it'd be a list containing the previously mentioned here;Because I'm an uncreative fuck when it comes to these things
The Joker, Tyler Durden, Glados. All because of what they stand/stood for to me.
Anarchy, Freedom and radical senselessness and the twisted mind and psychological mindfuck of science.

For the rest there are just some that I absolutely love as villians as Darth Vader and Venom, or a couple that I just find funny like Avalanche's Mr. Burns.

Venom was cool, but I think I liked Carnage better. Specially since I watched the animated series at a inapropiate age, Carnage scared the shit out of me 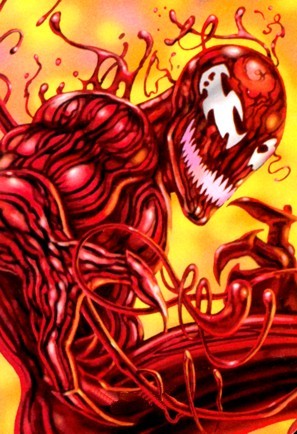 will you be betting on the improved black spiderman, or the fucking hellbeast that can turn his hands into axes.

idk, Carnage always just seemed like a Venom rip-off to me. And his personality was kinda boring imo. I mean, if we're going for Violent and Crazy, I like Deadpool-side of that way better than cracking jokes like "I don't want to do this but you axe'd for it"...

Venom had more depth than that, to me atleast. But I must admit, i'm biased :p

Edit; besides, they're both symbiotes y'know. Venom can turn his hands into axes and all that shit too, he just got adapted to being used as the spiderman-outfit.

fuck. How could I forget Deadpool. the ultimate anti-hero.

And yeah, I dont know much spiderman bio

I just saw it as 6 yo or something and Carnage seemed fucking brutal.

Yeah, due to my lack of being able to watch tv... I got into the whole spiderman stuff at a more.... "sad" -age. Being between 16yo and now. XD
Nevertheless, Venom won a spot in my still very childlike heart XD

Oh yeah, Tyler Durden, I like him too... I wouldn't completely consider him a full-fledged villain, but he's certainly up there. =P

(That yell is a lot shorter than people remember...)

Do you guys realize that pretty much all Carnage is is Venom on a Serial Killer?

Also, for me, The final boss of Luminous Arc will always have a special place in my heart because...

Spoiler:
You've been forking for him for your entire life, up until about halfway through the game, and the witches you were trained to fight are the good guys who help you defeat the real enemy, your God who's possessed the body of the high priest(Who's a kid)

Also, in the category of Disney villains, I'd like to nominate Claude Frollo. I have a thing for evil son-of-a-bitch villains.

Frollo's always been my favorite Disney Villain. I agree with you.

also pretty much the Nostalgia Critic's list of Disney villains, though adding in Dr. Fascillier from Princess And The Frog.

oh and favorite villain for me is dr. octopus as done by alfred molina. he is awesome :B

Any role James Earl Jones has played that a villain.

Also the Predator from Predator is awesome.