Ahaha, this is brilliant. For obvious reasons I never played Oregon Trail at school (although we had an awesome one where you had to build a motte and bailey castle before the enemy army arrived. I'm still bitter I never beat it), but a few years back I downloaded a version. This one is far better. I named the party after you guys.

On my first playthrough Viero wandered off and got lost/eaten, Snake died of dysentery literally a second before we reached the strip club and Ansem died of flu. Myself and Avalanche were the only ones that made it- despite Ava having two broken legs, a broken arm, three zombie bites, a near death experience, the T-virus and exhaustion. Whoo!

Now I want to play this. Even though everyone but me will probably make it. TO THE LEGIT COMPUTER!!!

GL with that one JGH. I'm not going to list a good portion of demotivational posters because I found a few while looking for something specific and I thought they were awesome

More on the cats: well? Good news everyone, they aren't doing this anymore 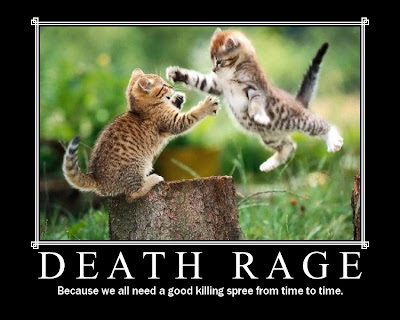 Well, ok, they were never SERIOUSLY like that, but at least they're getting a bit better. They managed to sit in the same room without jumping at each other. Granted, they were staring bolts at each other and the poor kitten was quivering the whole time, but improvement I guess.

Other things I ran into while looking for some form of a rage poster for lol's on the anger topic; This one....I had to do a double take on to make sure I saw what I did, infact, see.

That's all I'm gonna post, there's zounds more of course, but anyone with a lot of free time like yours truly can find bunch of funny ones.

Ahaha, this is brilliant. For obvious reasons I never played Oregon Trail at school (although we had an awesome one where you had to build a motte and bailey castle before the enemy army arrived. I'm still bitter I never beat it), but a few years back I downloaded a version. This one is far better. I named the party after you guys.

On my first playthrough Viero wandered off and got lost/eaten, Snake died of dysentery literally a second before we reached the strip club and Ansem died of flu. Myself and Avalanche were the only ones that made it- despite Ava having two broken legs, a broken arm, three zombie bites, a near death experience, the T-virus and exhaustion. Whoo!

I tried forum mod edition, everyone survived in okay health :l Perhaps I should try a harder difficulty next time. Notably J never got sick or bitten but fittingly broke several bones.
_________________

Alright, so, I'm sitting here on my laptop doing my usual thing after classes. Browse the web awhile, post a bunch of nonsense on the forum because it's excellent and I love it here, but from this point on it varies. I'll either play a game of some kind, go on some intellectual pursuit, set my mind on melt mode and sit in front of the T.V., tinker around on my laptop's various programs.

It occurred to me just now though, and it makes me curious enough to ask. You see, I've managed to for the most part, self-teach myself flash programming. Hell, two semesters ago I was taking a photoshop class at the community college I was at, at the time (I love tinkering around on computers, a wee bit to much maybe), and this same teacher also teaches the other computer visual arts classes on the campus. He sees me in the library between classes one time, tinkering around in my flash program. He looks at the small amount of animation I had at the time, sees it, and is impressed that I did so well being as I'm self taught using only internet guides. The amazing part? The following semester I take the Flash class for a GPA booster class, and to glean out the finer points that I couldn't quite pick up, like the button scripts. Button scripts are a pita. Closer to the end, he's actually showing more advanced pathing options. He shows all the ways he likes to do it, and mentions that there's this one kind that DOES work, and works really well it just gives him a hard time every now and then. After mentioning this, he looks at me knowing full well that I have beforehand knowledge of flash, and asks me if I know how to do it. Relmitos to the rescue! Woooo!

Anyways, to the point.

When I make a flash video, of course video game sprites/characters are prime targets. The majority of what I've done have been small music videos (all of.....4, I think) to share with the family, making particular characters a particular person. For myself, because the Relmitos character is a fully 3D character, and thus there are no 2D sprites for me to use, I personally use Zero from MMX4-6, cause I think Zero's pretty baller.

tl:dr; if you had to pick a game character to represent yourself in a sprite comic or a flash video (hint, hint) who would it be? Some of you don't leave much to the imagination, Darkfalco, SnakeInABox, DRTJR, but some of you.....good lord Minby

, some kind of Mario Samus Kirby mutant would look funny, but not quite doable. This is nothing set in stone, and I'm not promising anything, I'm just curious.

Mine should be fairly simple. lol Pit or Iggy.

I could go for a good Ganondorf representation.

Well, these are the sprites I usually use for myself: 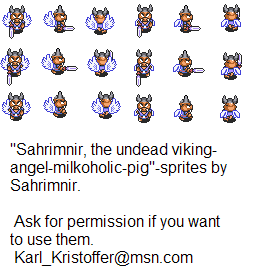 I hereby give Relmitos permission to use them.

Someone actually made a sprite of me once, but it was just a forward facing sprite. I actually want to see if I can find it again now...

sounds awesome i can't wait to see falco in action :B

as much as I like Link Sprites, and as much as I love GS, the GS sprites are gonna be a pain in the ass to use for you, and don't look that good. and Link is done to death. So...
TAIIIIIYOOOOOOOOH! 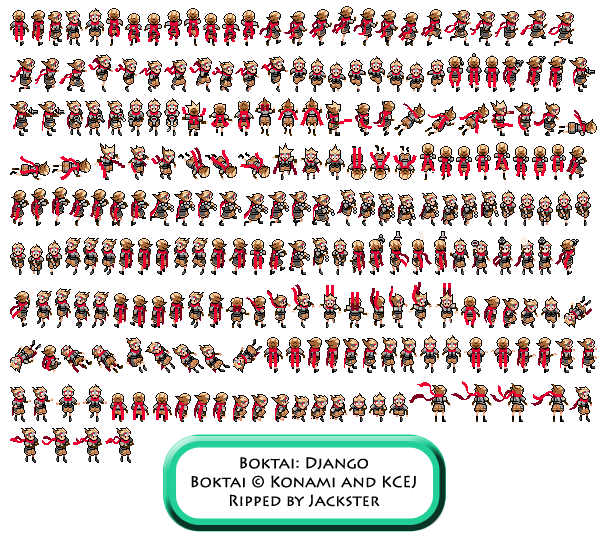 Heh, I made one of my cousins Link. Also; no idea who that is you posted, but I'll make it work. I lol'd, on my various sprite hunts, I came across these for our fellow resident Vaati lover; I probably won't be using them, but OH did I have a good laugh when I saw them

As I thought of who I should use as a sprite, I realized, I have no clue what you guys think about my personality. Now I'm curious... 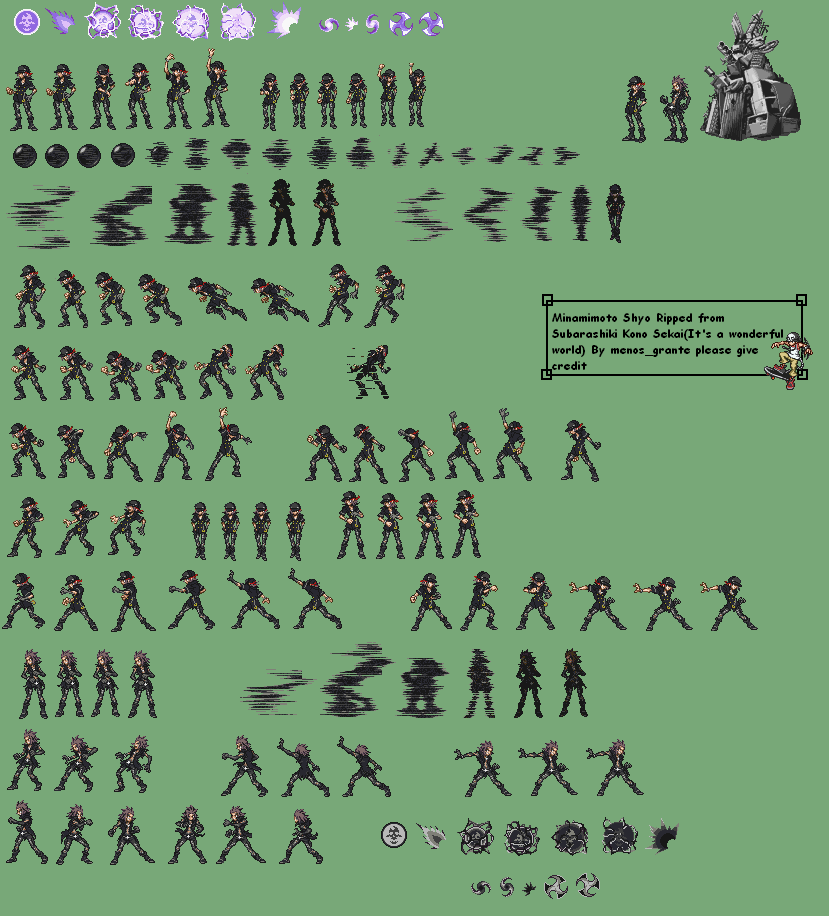 and a few more from my hard drive...
Link 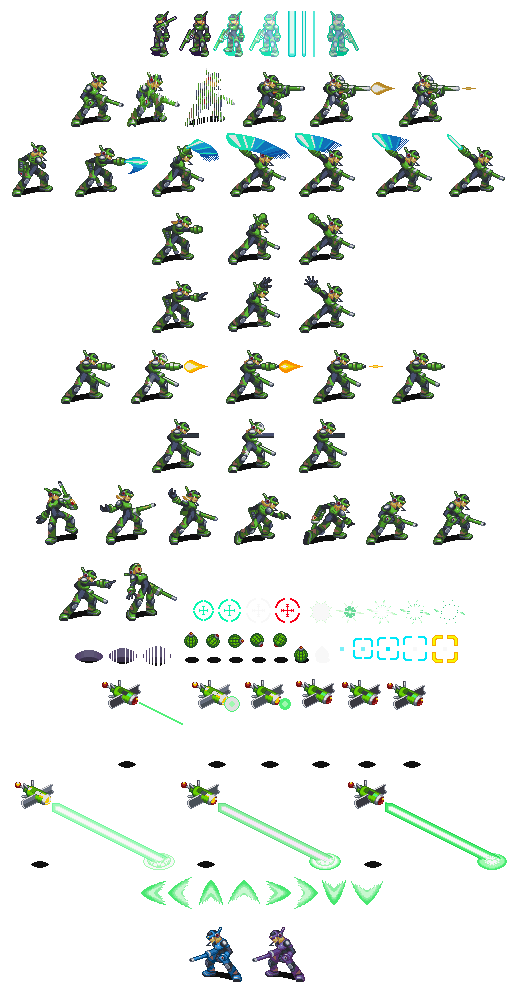 Sho, the Bionic Commando and obviously Geno were people I was thinking of, but IDK how people see me, so IDK who would fit my personality best. I have another few people in mind. And really, of all the Characters from Luminous Arc, Lucia and Saki? I'd be less insulted if you posted fricking Kaph or Nikolai.

Well if it is personality...I am right there with you Minby. I am not sure how people see me either. Sooo.....Who do you guys see me as personality wise?

look, minby, they were the only ones on my hard drive.

Personally, I see you as a crazy, somewhat hyperactive, yet still fairly rational, guy. Also, Some stereotypical gay thrown in there.
And did you HAVE to post them? Jeez.

yes, actually. I did. also, viero's personality does NOT match his real looks.

Eh, I have no clue what people think of me either, but I want to be represented by Ganon nevertheless.

Also, now that I'm actually home from my grandparents' I'm working on my GB post FINALLY. I apologize to all involved about hte delays, I'm very busy these days and have had a lot on my mind.

It's ok dude, we've all been there.


Now I'm feeling sad, looking at all the people with sigs.

So looks like I may have a job interview tomorrow at a grocery store....working in the deli/hot foods. Yuck but work is work.

I'd want to be represented by...Zelda, I guess. Or maybe Chun-Li or Cammy, heh.
although I'd be derpy enough to be Peach...

also fuck, we won the creativity question in trivia. Wasn't enough for us to even place, but we got the 5 point bonus and none of us were there to see it because we all went to get food. Derp.