I had an awesome time at the last MCM Expo, I hosted a Brony meetup which ended up with 130+ people there! I'm the one in the Darth Vader Applejack costume, as a joke.

And if this is the turnout for that, who knows how many people will be at Bronycon UK!

Hehe, seems legit. Except for the fact we hold conventions, which means we collectively hide away together for a weekend.

Went to the MLP fair, got two brushable Fashon sive toys of Derpy.

Relevant to how I see all of you. 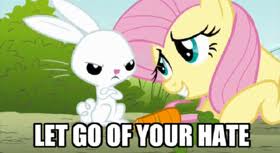 Oh, I prefer that one too actually.

Outlaw, both of those pictures at you.

Omicron Austin wrote:I didn't like these two episodes at all. =/

Discord is one of the coolest characters ever, but the whole thing was just bleh. Far too cheesy, and I don't like the fact that hypnotism took over the ponies so easily. I probably would have liked it much better if they snapped out of it through their own will rather than Twilight's magic.

I think it would be more accurate to say that Twilight's magic only snapped them out of it indirectly as it was described as a memory spell, so the mane 6 snapped out of the brainwashing by the same means as Twilight" Thinking about the times they've had and realizing the effect their friendships had on them.

Thats a pretty long vid, I'd watch it if I had any sort of attention span. On a related note: was that anamanaguchi at the beginning? If so, points to you good sir

I can't vote because i've seen only the first episode.

I'm guessing a number of you follow Tara Strong on Twitter, but for those of you who don't (or weren't paying attention): Apparently she just learned what shipping is.

So, all this talk about me hosting a Brony convention, and it finally happened last weekend. And for myself and many of the people who went, it was the best weekend of our lives. The previous picture I posted from the MCM Expo? Multiply that by around SIX.

Yup, we had close to 700 Bronies from around the United Kingdom turn up to Manchester for the very first Brony UK Convention (incorrectly shortened to the pun/acronym B.U.C.K.). Although we planned to have John De Lancie, voice of Discord, come to the con, but he had to pull out about a month beforehand. We also had a ton of artists and musicians in the community such as General Mumble, Interrobang Pie, Glaze/Wooden Toaster, TeiThePony, Lavender Harmony, Sketchy Sounds... and many more.

I even had people come up to me and asking for MY signature, apparently because I was so good at hosting the con. I just don't know what went right! But it really hit home that I'm loved in the UK's part of the brony fandom when I had people chanting my name at the after-party! (which was held at Fab Cafe, a Star Trek/Doctor Who themed bar)

Aww, thank you. But why?

thats awesome. though just saying not having john de lancie might have been a good thing. he's known as kind of an ass in real life. i think thats why hes so good at playing bad guys....

You're a Brony of great magnitude, it's awesome.

Plus I can respect an excellent host, any day.

You have my respect

...I shall endeavour to do something like this for Doctor Who. It really is a shame more conventions never work their way down to the mason-dixon line.

Also, I feel like these threads are started by the wrong people. Hans started the Doctor Who thread and I started the pony thread. There should be a way to transfer OPs of threads or something.

In any case, this thread clearly belongs to SonGopaul.

Congrats on running such a successful con! Almost making me wish I was a brony now

Are you planning on making this an annual thing? Since it proved so popular who knows, it might grow into the same size and scope as Ame and Aya. You'll be turning into the brony version of Will, haha.

Aww you guys, I don't like it when my ego gets too big, and you ain't helping XD

But yeah, it's been less than a week since the con, and there's already talks of next year's con. Even Andrea Libman is interested!

Fellow Brawlbronies! I come to you with another imperative beyond simple love and tolerance: to understand the base elements of magic, and how it works in the land that shared it with us

In all seriousness, the magic in the MLP universe is rather interesting, and really extends into the 4th wall and things that most let slide with the suspension of disbelief. Here I bring you a couple questions that I think would be interesting to discuss

1. Where does Pinkie Pie gain the massive (if seemingly unreliable) wealth of power?
2. Why is it that a baby Pegasus can fly, but Scootaloo is left grounded?

I look forward to the discussions

1. My guess is that she is related to Loki
2. Puond weighs less that scoots and she hasn't had a growth spurt yet. And if you think Faust is right I WILL END YOU!