Wait a second, Lauren Faust made astatement on that? She created the Equestria universe, so her word is the word of god.

What did Lauren Faust say?

I just want to point out, that Lauren Faust is a pretty cool name, whoever she is.

SonGopaul wrote:Okay, thanks to you guys (and my friends who wouldn't shut up about it...) I *ahem* "tolerated" the first 5 episodes, and am considering watching more.

Okay so this post was... less than a week ago and now I've just finished watching Season 1! All I'm missing off my checklist to being a Bronie is posting MLP related images... I can't believe it's been ONE YEAR since I made this post.

So, season 3 has started!

Spoiler:
King Sombra is definitely the most disappointing villain yet. I think he only actually had one line, and not much of a personality.

Other than that, I liked the season opener.

I disagree, Sah. I think the one of the scariest types of villains is the mysterious ones you never even really get to see in action. All you know about the guy is that they are big, mean, and able to destroy you quicker than a hedgehog in a mint factory. The fact that in the end you never did get to see what kind of evil they are capable of should be a little worrisome.

Speaking of the kind of evil King Sombra is capable of: 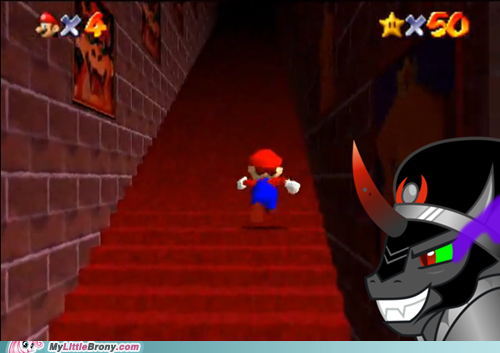 Mark my words that king sombra is going to make a comeback, essentially being pony Sauron, replace the ring for his horn.

Spoiler:
King Sombra is definitely the most disappointing villain yet. I think he only actually had one line, and not much of a personality.

Other than that, I liked the season opener.

I agree, but this:

DRTJR wrote:Mark my words that king sombra is going to make a comeback, essentially being pony Sauron, replace the ring for his horn.

So apparently ponies have movie theaters, who would've thought that?

And Babs Seed has Bon-Bon Syndrome (a.k.a. an inconsistent voice).

I think it's more of a case that Babs was Trying to sound like a hardass... and failing miserably.

My collection grows larger every day. Soon I will have an army

That's impressive. I'm gonna have to get a picture of my room sometime. Including the giant Pinkie Pie plush I got a few weeks ago.

So, anyone get the IDW comic this week? I joined in a group reading of it.
https://www.youtube.com/watch?feature=player_embedded&v=09K-FyDov4Y

I got the subscription cover. as well as ordered the box with the unique six "Normal covers."

So yeah, that's a thing. In my opinion season 3 had a slew of great episodes, but was ultimately disappointing. This thing on the other hand, has nowhere to go but up. Spike's a dog, the soundtrack appears to be as generic and as heavy handed with its lyrics as your run of the mill children's show, the mane 6 (or at least Twilight plus the alternate universe versions of the rest of the mane six in that universe) are in high school for no adequately explained reason, the villain looks obnoxiously card carrying in her evil (not even the interesting kind of evil, the inexplicably popular bitchy type of evil), and the trailer shows a boy, and as we know, all boys are meant exclusively for breeding purposes, so he MUST be Twilight's love interest.

I suppose there's still the likelihood that this will turn out half-decent. It's worth noting that the trailer shows a visual gag about Twi adjusting to her physiology (OMC THUMBS!) with Anthroshy, and it's being made by the same staff that works on the show. Plus, it's getting a theatrical release, which is more than what other shows of its apparent ilk get. So, will this film make everybrony smile, smile, smile, or should it be condemned to the depths of Tartarus? What do you guys think?

I'm doing my best to ignore this completely.

...Although a friend of mine said it reminded him of Doug, with all the kids walking around school with green and purple skin and the like.

So who here wants to play in a My Little Pony RPG? The basic premise is that you'll be blank-flanks (about Applebloom's age), having lighthearted adventures and maybe discovering your respective cutie marks. it's a really easy system to use, with a simple percentile die, roll below your attribute, or better yet, skill type affair, should you decide that you want to join in, or at least that you want take a look at this thing, here's the link

there's also some supplementary stuff for this game at lurking rhythmically. They don't have anything too fancy, just supplementary stuff like pony naming conventions (which I highly recommend you read), and the ability to play as zebras (I'd rather not see a party full of those, but one would be badass) or kelpies/merponies (we're in ponyville, play at your own risk.

P.S. This setting is going to be about a month before Twilight rolls into town.

A lot of the stuff the show makes is pretty "meh" for me at the moment, but I still enjoy it. However, when explaining it to a friend I realized I enjoy the fandom now for the friends I have made at the meetups. Unfortunately, work has prevented me from going to said meetups for a while. That, and I'm still doing pony askblogs on Tumblr.

Oh, and I'm still hosting BUCK (the UK's equivalent to Bronycon) in August, like I did last year.