You do realize I haven't been scum since Game 17, right?  I was town in G18, town in G19, host for G20, town in G21, town in G22 AND G23, and didn't play G24.  Your argument that I should be considered scum until proven otherwise is downright ridiculous, and your whole 65% thing is statistically invalid. It gets old pretty quick.

This all aside, where the hell is everyone else in this?  I havent had the chance to properly analyze this much myself but overall people seem content to just sit around and idle, and that's not good for a game this size.

I was kind of wondering the same thing. You and Req are the only really active ones this dayphase.

BorisTheSovietLoveHammer wrote:Eh no, you didn't play in G21. I should know

I was also missing in the last couple of games due to overload of present life situations. And J, I've switched once in this day. I mean, if y'all wanna lynch me, by all means, go ahead. Not like we have any better leads. Also, Q, don't take it personally, it's just a game, and if you've noticed, most people don't take me seriously. I'm allowed my crackpot theories and unfounded beliefs. Also, I'm bad at math, so no judgement there. I was making a rough estimation of games where I've guessed your alignment. Overall, I didn't think I was that far off. Also keep in mind that part of that percentage I'm giving is actually me saying that I thought you were town during certain games. Granted, worded poorly, but still. I think you and Vie are the most frequently anti-town players on the forum, of course, that's only speculation and I have nothing to back that up but a slightly feverish mind/memory, and the desire to poke things into activity

Sorry for any inactivity, I was writing two different papers. any way Outlaw seems to be very outlaw, which could  be a sign of guilt so VOTE:OUTLAW

Anyways I'm gonna toss a vote at Fed to maybe get him a bit more active in this game. 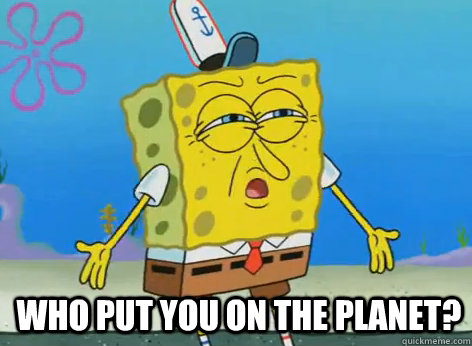 I ain't having that shit man, nah, you earned yourself a vote from me.

Shit's all crazy, we have no leads, I'm going to Vote:Req, but I don't really want other people to vote for him.

Hey, mine is just retaliation. He calls his vote off me I do the same.

Fair enough J, I really should do more in this thread.

Req is behaving like he always does. Outlaw is as unreadable as ever and i kind of understand him. There really isn't much to go for at this stage. Hmmm. I would really like to hear, what Q's hunch on Raya has been, especially since she had hardly posted and he never came around to explain it. Yes, an explanation for that would be really nice. Vote Quaetam until I get what I am asking for.

Also I bet Tingle is either a traitor, the godfather or a 3rd party.

Oh man, I didn't even see that Req was voting for me.

It is you, or me motherfucker.

That accomplished a whole lot of nothing, but alright *Shrugs*

Requiem all you ever do is accomplish a whole lot of nothing I don't know what you're complaining about here.

So what, I'm being voted on because I am unreadable or because I voted for Raya... You know first day lynch and all that shenanigans.

Aww, did I upset you Snake? You're welcome to vote me if it makes you feel better

Outlaw, I'm voting you because you were my fallback after Q and nobody has supplied a better suspect.

Requiem wrote:Aww, did I upset you Snake? You're welcome to vote me if it makes you feel better

That sounds like a taunt. Snake you going to put up with that?

Hmmm, Out of Outlaw and Requiem I'd lean slightly more towards Requiem but honestly I'm not strong suspicous of either. Outlaw does seem to be squirming a lot now but this really just reads of him acting like Outlaw. Req I'm feeling kinda weird about but I don't necessarily feel like he's scummy. Minby's vote is the one that bothers me here today. The vote for Req's a pretty lazy one, I mean all the votes today have been pretty minimal reasoning but having drawn a bit of attention yesterday Req is one of the easier choices but it's the not wanting the other people to jump on part that bothers me, feels like someone trying to cover their tracks before a bandwagon even starts.

I actually got that vibe too, but considering that he was voting for me, arguing it on that reasoning didn't seem all that plausible. Seriously though, if you guys want to lynch me, that's fine, I have fun watching reactions to my death. Not as much as I enjoy winning, but I mean hey, it's a small party game, so if I do, at least the game shouldn't follow far after it.

OH NO! I'm vote switching again! THE HUMANITY! FOR SHAME! Er... Something else that follows along that train of thought. I dunno guys, I'm bored and this game has had almost no activity.

Actually this game has had some steady activity.