Cartoons Outside of North America

Cartoons Outside of North America

I'm taking a History of Animation course in college and we have to pick a cartoon/cartoonist/style from outside of North America to research and present on. So I was wondering if any of you could help me out? I'd prefer to NOT do Anime as everyone will probably go that route. Help?

Pretty sure this is as dutch as it gets..... Classic even.

It's been translated and localized here, but apparently Martin Mystery was originally made by an animation studio located in Paris.

Thanks guys, keep the toons coming!

I thought about Wallaca and Gromit, TJ. Just not sure if it qualifies. Most of the curriculum seems to be based on drawn animation.

Wicky the Viking; Dutch/German/Japanese according to the wiki.

Iznogoud, originally french according to the wiki.

Walter Melon, collaboration between the french, scottish and Saban (not sure if it was the Japanese or American branch).

Dommel, drawn by a Japanese studio, with everything else done by Belgian/Dutch studios according to the wiki.

If plasticine animation is allowed, I heartily recommend The Trap Door, classic Brit children's show that I absolutely loved as a kid. The episodes are only 5 minutes long, you can watch the entire first series in 90 mins. The animation is fantastic. Here's my favourite episode, but seriously check out the whole show, it's brilliant:

If it's style you're after, try Ivor the Engine. It's a pretty comfy show; absolutely nothing happens in it, but it's lovely to watch.

As for story, every European will agree with me when I say Animals of Farthing Wood, which traumatised an entire generation:

So I got stuck doing Pokemon in a group. Any info on how the animation has changed that you guys can help me with? I stopped watching after the original series lol

I won’t bother going into the details of the anime, I’m sure your group will have dug up all the basics anyway. Some extra points to consider though:

- Around the Johto/Hoenn arc changeover the animation went from hand drawn to computer generated. The contrast is pretty damn sharp: 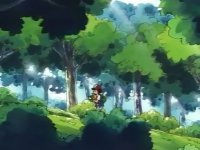 You can really tell with the colours, they went from watercolours to garish bright. IMO, this was when the quality went down too.

- Explosions everywhere. This is VERY conspicuous in later episodes. Basically, every Pokemon attack causes an explosion. Compare and contrast Poison Sting in the earlier episodes to later ones. In the first, the attack hits the Pokemon and stays there. In the next, it hits and explodes. I can only imagine this is down to dramatic effect rather than censorship (Battle Revolution on the Wii was the first game to show Pokemon actually hitting each other, so it’s not violence being the problem).

- Less cultural references as the show went on. The Kanto arc was extremely Japanese and featured a lot of references to Japanese culture. Sometimes it was subtle (the riceballs), some are a lot more blatant ('The Purr-fect Hero' is based around Kodomo no Hi, and the princess day episode is based around Hinamatsuri, complete with dolls). These references were toned down a lot as the series became internationally popular, and have more or less disappeared together.

- Less visual puns. Tying in with the culture another, as the series progressed there were a lot less visual puns that relied on the Japanese language. A great example is in ‘A Chansey Operation’. Meowth loses his head coin (koban in Japanese), but the Chansey nurse keeps bringing him the wrong items- a bowl of rice (gohan), a go board (goban), a police hut (koban) and a Venonat (Kongpang). This obviously caused a lot of problems in translation, so the anime seems to have dropped a lot of this now.

- Less random/slapstick. The older episodes had a lot of random cutaways (the infamous “Don’t have a COW Misty” moment), colourful backgrounds, slapstick etc. Again this became toned down as the series progressed. I mean, look at this nonsense:

You don't see that in later episodes.

I can give more examples of these points if you need them.

Finally, one thing you should DEFINITELY check out: in Best Wishes (Black and White, the gen5 anime) there's a flashback about Ash and Charizard, who he had back in Kanto/Johto. They reanimated a lot of these scenes from their backstory. Here's a comparison of some of the parts. You can see how the animation's changed, and IMHO not for the better. The lines are sharper, the colours less warm, and basically it's very sterile.
_________________
HG/SS Friends Code: 2364 8721 9695   B/W Friends Code: 2193 7770 9554   X/Y Friends Code:1805-2682-3033
"Foxes never lose their tricks, do they?" - Quaetman
"We'll be going about our business one day and then someone will be like "hm, where's Barda" and Raya will all suspiciously be like "WELL DON'T LOOK AT ME"..." - Rocket Admin Camilla
King Avalanche:

Raya, you're a Godsend...or would be if our presentation wasn't done now

All points I would have loved to use, but we still seemed to get 20/20 so I guess I can't complain lol